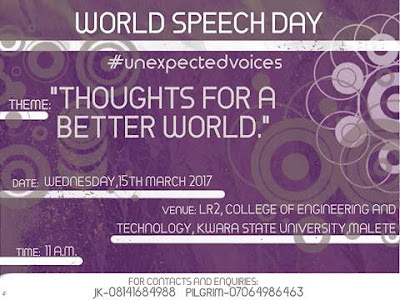 The annual World Speech Day 2017 was held in Kwasu and the program kicked off by 11:00 A.M at the Engineering building.

“The future women have to work for”

A prosperous and effective features rely heavily on your present condition. It is vital for every woman to define their intending future.

According to the books of Faith, it should be noted that “Women are created to be a help mate and contribute to the whole development of existence and not a dependent being upon Men” women are meant to perfect existence.

Women should be dependent enough to sustain positive virtues that will contribute to the world development. 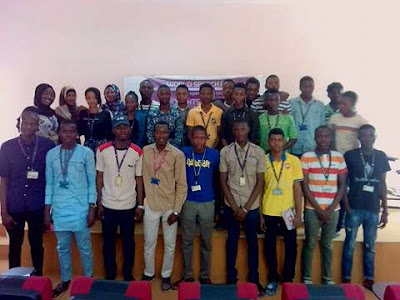 “Change begins with everyone”
by Abubakar Imam (ICT)

He advocated for youth involvement in Political happenings in the country. Implored Nigerian youths to cnecentrate on developing their countries, contribute their quota. Sighted an example of Students bypassing the queue at the ATM stand, disobedience of traffic rules and regulations. He asseted that the real change begins with us.

He proclaimed himself as an illetrate an identify how youths are getting themselves wrong such as Religious confusion among others. He advocated that youths should embrace friendliness, brotherhood and show care to those in needs.

The second speaker (Samuel) brushed through the lexical structure of the word “Better”, he emphasised that “Better” comes from “Good”. He confessed of his misconduct on how he stylishly make some little cash from selling photocopied materials to course mates and implore everyone to stay away from such acts. Also, he declared Nigerian youths to be success driven, battle ready and act against traditional and ethnocentric stereotypes.

Dolapo one of the speakers at the event talked about “Building valuable skills as a student”, he emphasized on leveraging the internet to learn valuable skills that will increase individual level of productivity of youths. Also. he exclaimed that what you don’t have you can’t give and before we think of rendering assistance to the larger community.

“Enough of words and thoughts positive  actions are needed” were the resounding words of Kolapo Imam at the WORLD SPEECH DAY event held at Kwasu. Kolapo emphasized on the wrong use of the internet today. He juxtaposed between the “HIM” now and the previous “HIM”, saying he loves what he is doing now, than what he was forced to do then (just study and get high grades). He spoke of his mentor EMDEE TIAMIYU as a source of motivation to him and many others. Also, he advised everyone to put in positivity to everything they are doing and expatiated on the use of digital devices (smartphones, ipads, laptops, tablets).

Lastly, he rhetorically asked attendees on
Where were you last 5 years?
Where and what did you get wrong?
Where do you want to be in the next five years?