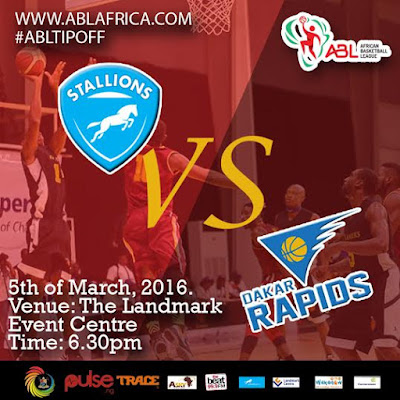 History will be made on the 5th of March, 2016 as Africa will come together for the debut of African Basketball League at Landmark Event Centre by 6.30pm. Four Cities will play host to six African teams competing for number one spot and all star weekend games during the Easter break.

Thirty Tickets are up for grabs for the ABL debut game between the Stallions of Lagos and Dakar-Rapids of Senegal, to participate follow these steps:

Follow us on social media,
Facebook – ABLAfrica
Twitter- @ablafrica
Instagram- @ablafrica
Repost this banner on any of our Social Media platforms with the Hashtag #ABLTipOff
The Posts with the most Likes/Retweets or Shares will be declared winners on Friday March 4th,2016.
Tickets are now available on https://abltickets.com/.
The ABL is proudly supported by TRACE, Union Bank, Wakanow, Cornerstone Insurance, THE BEAT 99.9FM , Pulse.ng,ASKY Airline and the Lagos State Government