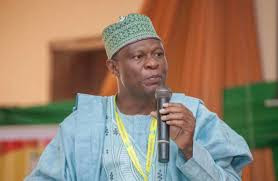 Following the ranking of the Kwara State University (KWASU) as 15th among over 140 Universities in the Country, the Vice Chancellor of the Institution, Prof. Abdul-Rasheed Na’Allah has attributed the achievement to the excellent foundation laid by the former Governor of the State and now Senate President, Dr. Abubakar Bukola Saraki.Prof. Na’Allah in a letter of commendation to the Senate President, said the university has continued to thrive on the vision set by Saraki, who founded the school during his time as Governor of Kwara State.“Your University has continued to grow stronger, even in this very difficult economic situation,” Prof. Na’Allah said. “I am happy to inform you that in the University ranking recently released, Kwara State University is ranked 15th among more than 140 Nigerian universities! This is to your glory, as the visionary and founder of KWASU.”The University don noted that from the inception till date, KWASU has held faithfully to the vision that Saraki set, “even under this tough financial situations.”Na’Allah said the university is growing in international collaborations and pursuing World Class Standards, adding that “our IT is strong and vibrant and continue to expand, our cutting edge programs are sought after nationally, with the flagship ones as Business and Entrepreneurship;“Tourism, Hospitality and Events Management;, Computer Science; Aeronautical and Astronautical Engineering; Agric and Bio-engineering; Microbiology; Material Science and Engineering; Mass Communication, Special Education, and Environmental Science.“KWASU has sustained its UNESCO Chair in Alternative Energy as one of the only two UNESCO Chair programs in Nigeria (the second being at the National Mathematical Centre). We are already proposing to UNESCO for another UNESCO Chair on climate change. We graduated about 1, 500 students in the 2016 Convocation ceremony, and this academic session (2016-2017), the general student population has reached 7000.“Thank you, for your vision and continued support, without which KWASU will not be where it currently is. As you have directed us to do from inception, the University is establishing a kind of foundation that will not allow any disruption of academic calendar.“The efforts by a few through blackmail, manipulations and violence to cause chaos in the name of disruptive unionism did not succeed. Healthy and progressive unionism by staff and students are springing up, all tied to the ambition for attaining a World Class status for KWASU”, the VC stated.He pledged that KWASU would constantly aim at generating novel ideas and innovations that would serve humanity in ways you would make all proud.“Already, we have established a Centre for Undergraduate Research, started Master’s and Doctoral programs that focus strongly on advanced research in certain areas, strengthened community development activities both by Community development Centre (CCD) and by every academic staff as a requirement for promotion from one cadre to another.“Again, thank you, for continuing to make us proud. We at KWASU are keen observers of the great leadership you are providing at the Senate”, Na’ Allah stated