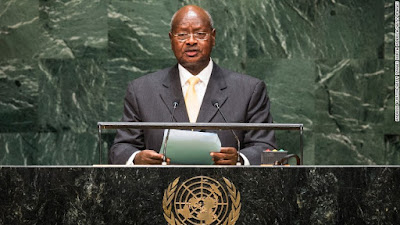 5th Term/over 30 years in Office? They should just crown him King. Lol  Uganda’s election commission has declared incumbent President Yoweri Museveni, who has been in office since his rebel group seized power in 1986, the winner of the country’s 2016 elections. He won with 60.7% of the votes while his closest competitor, opposition leader Kizza Besigye, had 35.3%, the commission said. The country had a voter turnout of 63%.
More interestingly, opposition leader Besigye was arrested and two people died at his opposition campaign office. Dictatorial moves? He was put under “preventative arrest” at his home in Kampala on Friday, along with six officials from his party. Authorities detained the officials because they allegedly planned to announce unauthorized results tallied by the opposition.
This is not also not Besigye’s first attempt to unseat his former boss. He lost presidential bids in 2001, 2006 and 2011.