TRENDY MATES AWARD 2017 – KWASU
The KWASU most anticipated award show, which was held on Saturday night  at the school main Auditorium. To some it was fun and to some it wasn’t.  The event which was studed with students in great style and fashion on the red carpet, started at a very late hour. 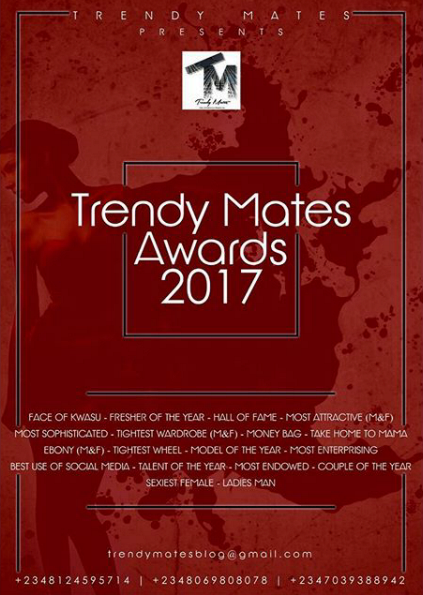 At the welcome of Kwasu base artistes who were not allowed in at first and were told to pay for tickets before going in to perform and was later settled was the first showdown outside the auditorium.
The event kicked off around 12a.m this morning with an open cypher within Kwasu  rappers Omotayo,Lilkixzy,Dharmiedrey,Imperial and Hamzah the poet.
Well yesterday took another turn of dubious act as Dremo nor Jhybo was present there. And some nominees weren’t available to accept their award though over 50% of the award was won by ICT college and 30% by Engineering while other colleges shared the 20%.