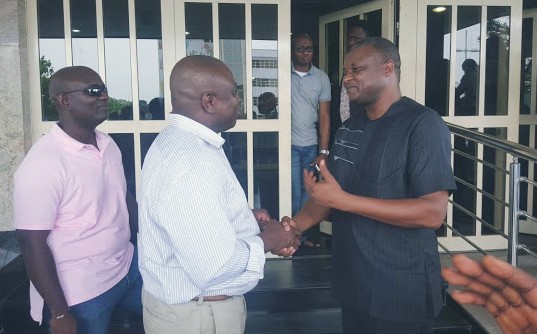 In a warm handshake with Gov Ambode is Abba Kyari, a real life Jack Bauer of the movie- 24:
In 2011, my car was snatched from me by robbers at gunpoint. That scary experience brought me face to face with and later close to one of Nigeria’s smartest serving police men alive. His soft voice, boyish look, gentle mien and calm disposition belie the lion heart, sharp instincts and intellect and ruthless efficiency of a master crime-buster. Call him Nigeria’s Jack Bauer (of the series 24 fame) and you will not be wrong.

Last weekend, not a few Nigerians were excited by the news of the rescue of the three kidnapped female students from Babington Seminary, Ikorodu, Lagos, and the arrest of the culprits. The man who cracked the horrible crime was none other than CSP Abba Kyari, O/C IGP Intelligence Response Team (IRT), a position he was fittingly and deservedly given by the current IGP, Solomon Arase.

Being a “Lagos Boy”, it was only natural that he was brought in to crack the case, and crack the case he did! Just like he found my stolen car back in 2011! 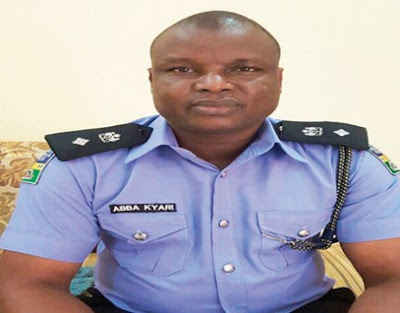 A 1997 Geography graduate of the University of Maiduguri, Abba grew up in Maiduguri, Borno State, where he attended Government Primary and Secondary Schools in Maiduguri. He did his National Youth Service Corps (NYSC) in Akwa Ibom State in 1998 and joined the Nigeria Police Force as Cadet Assistant Superintendent of Police in 2000. 16 years after, he has earned for himself the reputation of a diligent, no-nonsense and intelligence officer, such that the police authorities and politicians are proud to have and work with. And from get go, he demonstrated to his bosses that he knew why he joined the force, and has kept at it.

After completing his training in the Police Academy WudilKano, Kyari was posted to Adamawa State where he served in Song, Girei and Numan Local Government Area with remarkable successes in crime bursting. He stood out when he led the arrest of a notorious armed robber called, ‘Ndagi’ a.k.a Spirit. Spirit held Numan, the third biggest town in Adamawa State hostage for several years before his eventual arrest. From then, there was no looking back for this intelligent officer with a sharp investigative mind and sometimes deadly courage.

Kyari joined the Police Mobile Force, popularly known as Mopol in 2005 and was there for about five years until his posting to Lagos Command October in 2010. He was deployed as the second in command (2/IC) to SARS and later became the OC SARS on January 15, 2011. It was said that the then Governor of Lagos State, Babatunde Fashola, who decorated him with several awards, resisted ceaseless attempts by the Police high Command to have Kyari redeployed out of Lagos. This was on account of his amazing achievements in combating the menace of armed robbery and kidnapping in Lagos.

Kyari has a long litany of exploits under his belt. He was instrumental in the arrest of the most notorious armed robber in the South West, Mr. Abiodun Egunjobi, otherwise known as Godogodo. Godogodo was arrested in Ibadan, Oyo State, with some of his gang members. SARS recovered 42 AK47 rifles from the gang. Godogodo confessed to have killed over 150 Nigerians, including over 50 policemen during his 10 years reign as the kingpin of South West armed robbers.

There was also the arrest of Benjamin Osinachi a.k.a China and his entire gang of kidnappers based in Ghana, but operated in Nigeria. Their victims included a sitting High Court Judge, a sitting local government chairman, many expatriates, amongst others. China and his gang members held South West residents by the jugulars for long. But Kyari with his men, were said to have deployed, “Advanced Technology and brought the kidnappers down.” Several AK47 rifles and thousands of ammunitions were recovered from the gang.

The defeat of Mr. Andrew and his gang of deadly kidnappers in Igando area of Lagos metropolis was spearheaded by Kyari and his men. SARS recovered 12 AK47 rifles, GPMGs and rocket launchers from the gang. Also during his tenure in Lagos, SARS arrested Chinansa and gang in the Ajangbadi area of Lagos. The SARS men recovered 11 AK47 rifles, rocket launchers and GPMGs from them.

There was also the shocking arrest of the General Overseer of a church located at Ejigbo. The General Overseer was part of the gang of robbers that attacked the Murtala Muhammed International Airport. The gang was later discovered to have operated at Ogun, Kwara and Rivers States. When they were eventually arrested, police recovered five AK47 rifles and GPMGs.

Kyari was also instrumental in the arrest of the kidnappers of former Minister of Finance, Dr. Okonjo Iweala’s mother. The kidnappers used to operate in Delta, Edo and Port Harcourt. This gang killed the former deputy Governor of Anambra State and kidnapped the wife of a sitting Supreme Court Judge.

Kyari and his men also arrested the kidnappers that abducted Dangote’s cousin. Another gang that kidnapped a British citizen, Mr. Dickson Lee, along the International Airport Road, was also defeated. The Briton was kidnapped moments after landing in Nigeria. There was the arrest of Obinna in Onitsha. Obinna was the most notorious sponsor and kingpin of robbers who specialized in hijacking trailers carrying containers. SARS has also in its feather, the arrest of Emmanuel aka Arab. Arab and his gang members were described as deadly. 12 AK 47 rifles, including four AK47 rifles belonging to Policemen they killed during bank robbery in Kwara State were recovered from them. Kyari and his men led the rescue of a young Kwara female model in Delta State. The policeman and his men also led in the rescue operation of Alhaji Fashola, owner of Kings Petroleum in Isheri Oshun, Lagos.

Lagos residents cannot forget the arrest of the nanny who kidnapped three boys belonging to same parents. The kids were called ‘the Orekoyas kids’. The nanny was arrested within three days that the case was transferred to Kyari and his men. Few days before Kyari got his posting letter to Abuja, he led the arrest of Lekki armed robbers who attacked the First City Monument Bank (FCMB). They killed three policemen and a girl who was hawking fish, carted away money and escaped through the waterways.

Splintered members from the Lekki bank robbery gang recently attacked banks at Ijede and Ogolonto areas of Ikorodu, Lagos. They escaped, as usual, through the waterways and Kyarideployed his Technology and arrested four of the Ikorodu bank robbers.

A very shy guy, Abba wouldn’t talk about his work and how he does it, but his men and people who have come across him would attest to the fact that his best attribute is that he sees himself as a Team Leader and not a boss in the discharge of his duties and co-ordination of men and resources to fight crime and criminals. One of his boys told me that” “OC is a whiz kid. He is too much. He understands technology and uses it to track down criminals. Also, he is a leader. He motivates us his men. We eat and drink with him. He attends our weddings, birthdays and naming ceremonies of our children and funeral of our relatives. In short, he is like a brother to us and leads from the front. He is always there for us and even teaches us how to key into technology while doing our work. In short, the OC is wonderful.”

So, here’s a brilliant officer who is also a great leader, who is ever ready to learn and teach others so the war against crime and criminals may succeed. No wonder the Lagos State Governor, Akinwunmi Ambode, like his predecessor, was full of praises for Abba Kyari as he broke the news to Lagosians of the rescue of the three female students and the arrest of their kidnappers. He couldn’t be headed anywhere else but the top having stayed on top of his game from the moment he joined the Police.