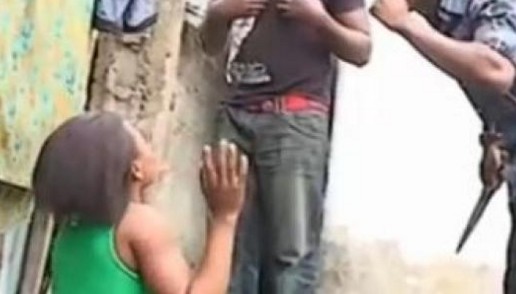 Three heartless guys have been arrested after they held a young lady captive and molested her severally in the presence of her helpless boyfriend somewhere in the FCT, Abuja.

The incident happened when the 22-year-old lady, identified as Faith, visited her boyfriend in Abuja, from her base in neighbouring Nasarawa State.

The suspects who live in the same neighbourhood of Jabu village of Dutsen Baupma, Bwari Area Council of the FCT, barged into the man’s room, wielding dangerous weapons like machetes and cutlasses and held him captive while they took turns on his girlfriend.

According to Daily Post, the lady had not spent up to an hour with her boyfriend when one of the suspects, said to be a friend of her boyfriend and who knew of her visit, asked his two other accomplices to accompany him to the friend’s house.

After the act, the three men ran away and the lady’s boyfriend went to the police to report the case and the suspects were traced and arrested. They allegedly admitted to the crime during police interrogation.

The area’s Divisional Police Officer (DPO), CSP Aisha Yusuf, confirmed the incident, saying the case had been transferred to the State CID for necessary action.