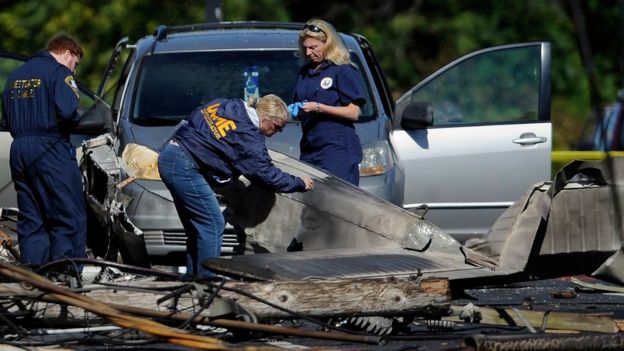 A Jordanian flight student is said to have deliberately crashed a small plane in the US state of Connecticut, killing himself and injuring his instructor.
A US official told the AP news agency it appeared to have been a suicide and not terrorism-related.

The US National Transportation Safety Board said the crash in East Hartford was “the result of an intentional act”.
Local media reported the two men on board had been fighting for control of the Piper PA-34 Seneca.
The Jordanian flight student has been identified as Feras Freitekh, 28.
US officials said he had been living in a Chicago suburb and was not known to the intelligence agencies.
Instructor Arian Prevalla – who was badly burned but survived – is said to have told police there was an altercation in the cockpit during their training flight and he was unable to regain control from the student pilot.
He described Freitekh as disgruntled about learning to be a pilot, the official said.
The twin-engine aircraft crashed onto a busy road near jet-engine maker Pratt & Whitney’s headquarters.
No one else was injured but a woman driving with her three daughters narrowly avoided colliding with the plane, Reuters reported.