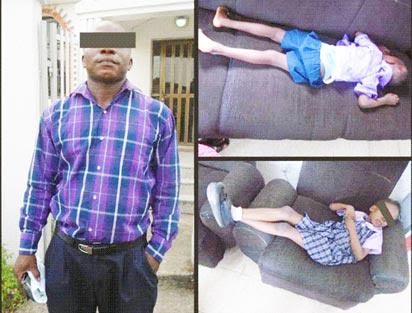 Seunfunmi Oseni, 4, and Amira Otegbola, 6, both pupils of New Vine International School, Mushin, Lagos have been hospitalized after they were allegedly flung out of their school bus by their proprietor, Ekezie Augustine pictured right, at Costain Roundabout in Lagos, on their way from an excursion to the National Theatre, Iganmu.

According to Vanguard, Ezekiel was immediately arrested by policemen who witnessed the incident and handed him over to the Divisional Traffic Office, Iponri, by operatives of the Rapid Response Squad, RRS, of Lagos State Police Command for prosecution while the pupils were rushed to the Brickfield Medical Centre, at Ademuyiwa Road, Ebute Metta, where they were referred to Foremost Radiology, Ogunlana Drive, Surulere, for brain scan before further treatment.

“the boy, Seunfunmi, sustained a lot of bruises on his head and leg. He has not walked since he was brought here. We feared he has injured his legs too. He is always folding it and he preferred to be carried.”.

Further investigations revealed that the school was not registered with the Lagos state Ministry of Education. However, the Principal of the school argued that certification of the school was being processed. He added that “the children were over-excited and uncontrollable before the incident happened.”