Photo: India’s first test tube baby delivered of her own baby by the same team who brought her into the world 30 years ago 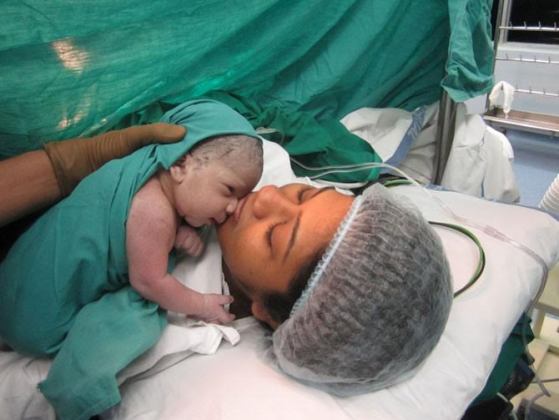 India’s first test tube baby, Harsha Chavda delivered her own baby with the help of the same team who brought her into the world in 1986.
Dr. Indira Hinduja, a Mumbai-based gynecologist/obstetrician is best known for her pioneering work in bringing India’s first test tube baby into the world in 1986. Baby Harsha Chavda is now 30, married to a businessman Divyapal Shah and works as an accountant in Mumbai
On Monday March 7, Dr Indira Hinduja delivered Harsha’s baby. The healthy newborn, conceived naturally, weighed 3.18 kilos. “Both mother and baby are doing great,” said a happy Dr Hinduja.
The team that performed the C-Section on Harsha and delivered the baby today is the same team that delivered her mother Harsha back in 1986. One of the team members, Dr Kusum Zaveri, who is a part of both teams, said,
“Harsha has been in touch with us all her life. We meet and interact with her on a regular basis. It is but natural that she chose us to help deliver her baby.”
“It is hard to believe that we have delivered more than 15,000 test tube babies since that day when we first delivered Harsha,” said Dr Hinduja. “I still remember the day she was born—it was August 6, 1986, at 4.10 pm, at KEM Hospital. Her parents were on top of the world and so were we,” she fondly recalled.
“The Test Tube baby technique though in practice in the western world was not established in India until we found success in 1986 with Harsha’s birth. We had to take so many permissions—from the Ethics committee of KEM Hospital, the ICMR, etc,” said Dr Hinduja.
“Harsha’s mother, Maniben, had suffered from tuberculosis, which had permanently damaged her fallopian tubes. She was desperate to have a baby, and when we explained the new technique to her, she agreed to it immediately. We did the procedure and spent the next few days praying that it would be successful,”
“Coincidentally, Maniben’s pregnancy test came positive on my birthday. There was an international conference going on at KEM—a senior doctor interrupted it to announce the big news of the pregnancy. And when the delivery finally happened, there was media frenzy. Everyone rushed to KEM Hospital to congratulate us,” she added.
Harsha’s pregnancy, on the other hand, was smooth and uneventful. “There is no reason why test tube babies cannot conceive normally. In Harsha’s case, we had to do a C-Section because it indicated a breach presentation,” explained Dr Hinduja.
Dr Hinduja and Harsha have developed a close bond over the years and have been present in each other’s lives; from Harsha’s childhood to wedding in 2015 and all through her pregnancy and delivery.
been present in each other’s lives ticking off landmark events, whether it is Harsha’s wedding a year ago to businessman Divyapal Shah or her pregnancy.
“Harsha will always be special to us,” said the doctor