Ooni Of Ife is About To Marry A ‘Runs Girl’? 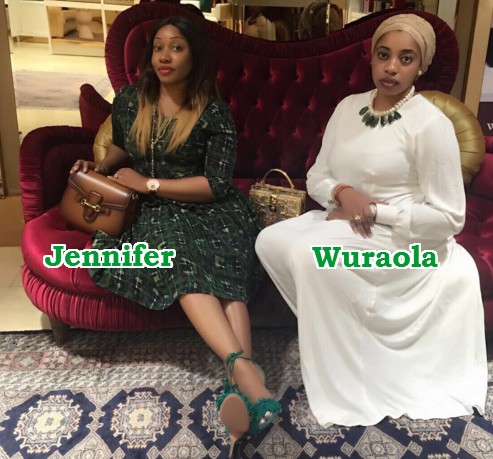 I ignored this story, but because it affects the most respected Yoruba monarch, I believe it’s wise I bring it here so Ooni Ogunwusi and his people can investigate the dirty details before they go pay her bride price, just to be sure it’s not an “elebolo” that is coming into the palace.

The lady who’s making the revelations about Wuraola’s “dirty lifestyles” is well known to her, so if all her claims her found to be false, after proper investigation, actions could be taken against her.

Is it true that Wuraola, who the Ooni of Ife is about to marry, had twins for a former governor? Was the s*x mate of a former Senate leader? Ran away after her legal husband went broke? See details…

It’s amazing how Jennifer is suddenly flaunting Sonia as her sister. Why haven’t you ever shown her as your sister all these years? You waited till the accounted Olori title came.

Jen you and your father are just users willing to identify with anyone you can extort money from to buy your outrageous…. Sonia is your sister, where were you guys when she was roaming all over Abuja? When she hits a big maga you identify with her to get him to buy your watches and luxury.

Sonia remember that if anything happens to this your marriage to Ooni that is the end of you. Gone are the days when you can come out and find another person.

You are also too possessive and destructive to share your man with another woman. In fact nothing drives you nuts than your man having other women. You are destructively possessive.

You married Elie Khouri legally at AMAC (Abuja Registry). Until December you were still married. Is the Ooni marrying another mans wife?

Abi Ifa and Ife Chiefs no dey check the hands of who dey enter their palace again?

You lie so much and claim so much. You remember your days with your friend Fati after Saminu (former Governor of Jigawa) dumped you disgracefully and Hajiya at coomassie crescent who was also your love-vendor?

Try and pay all the people you owe cos you are a No1 debtor.

You married Elie to spite Abacha family. Now you are marrying Oba to spite Elie.
His whole family went against him marrying you. You gave his mother so much hell. Talking down at her and disrespecting her your normal way of behavior. You sucked Elie dry all his little expatriate change you took it sent him into debt and you ran away. You were still sleeping around while married to Elie to fund your lifestyle.

You think God is sleeping? Your story will come to light as it has always done.

Correct your ways. Your quest for money, fame and power: this is your last bus top. You don enter one chance bus wey you no go fit comot…

Are you still going to hold this marriage ceremony in John Obayuwanas house as your father’s house? Because Na him house you dey always use shine.

Since you are so ashamed of your father’s Benins flat (block of flat apartment) I am surprised you never used sense to build him a befitting house to cover up.

Are you now back to Christianity? Cos you were born Christian changed to Islam bearing Zainab for Hausa men. Now you are marrying a Christian abi Ifa’ist are you now Chrisfa or Christian or Muslim?

From Itohan at Benin to Sonia to Zainab to Wuraola, Iya clap for yourself. You’re the queen of rebranding.

*Another Twist To The Story…
Sonia (now Wuraola Otiti) was previously married to former Jigawa Governor Saminu Turaki. The marriage packed up due to a scandal involving her twin pregnancy because Turaki was battling impotency at that time. The marriage ended after the twins died at birth.

Wura who is in her early 30s met Eli and relocated to Dubai in 2015.. As at mid last year, she still flaunts him on social media as her husband. She has since deleted all her social media accounts.

Why did the Ooni got entangled with this highly controversial lady?

– Sincerely, I don’t have anything to say on this because ladies of these days their way no dey pure. I think it’s up to Ooni Ogunwusi and his people to decide to investigate or marry her like that. Simple!