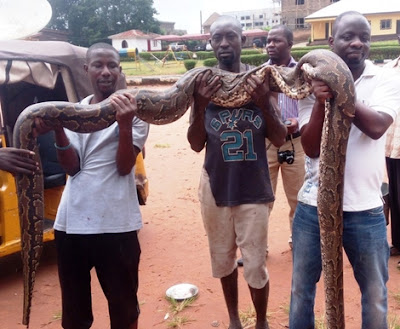 A monstrous python which has been reportedly terrorizing a local community and responsible for the disappearance of hundreds of chickens for many years, has been finally captured by residents.

A ‘Criminal Snake’ that has been terrorizing residents of Mubo area of Maraba in Ilorin Kwara State has finally been killed. 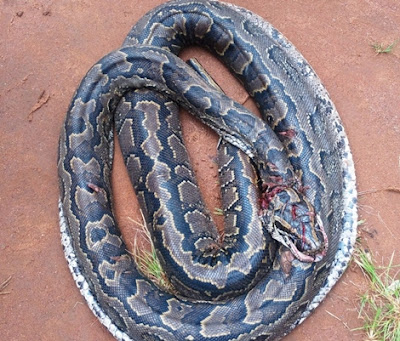 A social media user who posted the photos on a popular online platform said;

“Words have it that the snake has been killing their domestic animals like goats, fowls e.t.c for the past thirty years.

“However nemesis caught up with it on the 14th of September when the python swallowed another domestic animal making it sluggish for a while around the swampy car wash area at Maraba where it was reported to have been killed.

“The over 30 dark circular stripes on the body indicates that it is over 30 years old. It was also reported that the python is a female and that the male may soon be discovered because he will come searching for the female that has been killed.
SOURCE