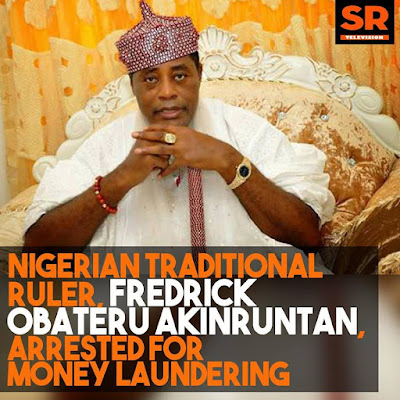 There were reports online yesterday that the traditional ruler had been arrested for money laundering but his chiefs say this is not true. Read the press statement below…

The Olugbo-in-Council which is the Highest Traditional Body of Ugboland in Ilaje Local Government Area of Ondo State have debunked rumours of the arrest of the Olugbo of Ugboland, His Imperial Majesty, Oba (Dr.) Frederick E. Obateru Akinruntan, CON.

Speaking through the Secretary of the Kingdom, Chief I. A. Demehim, the Olugbo-in-Council, asserts that the reported arrest of the Highly Revered Monarch, who is the Paramount Ruler and Prescribed Authority of Ugboland as well as Founder of the Multi-Billion Dollar Obat Group is completely false. According to High Chief Isaiah Demehin, “the news report by Sahara Reporters which is also being peddled by several soft sell bloggers that Kabiyesi was arrested by EFCC for Money Laundering is not only laughable and false but also a sacrilege to the traditional stool of our land.

The Olugbo is domiciled in Ugbo, and Kabiyesi was dutifully attending to traditional matters as well as the needs of his subjects on Friday” Furthermore, Chief Isaiah Demehin stated that it is pitiful that such a blog as widespread as Sahara Reporters would tell a lie against a Monarch while throwing away all ethics which places the onus on them to confirm from the Palace of the Olugbo which is always filled with throngs of people and activities which the Olugbo presides upon by himself or cross check their write up with the EFCC as a mark of professionalism.

In conclusion, he stated, “I wish to advise our journalists to always cross-check their facts and stop embarrassing innocent persons. It is especially sad that any journalist would embark on a path to destroy the great image of Nigeria’s Doyen of Industry who has contributed immensely to the socio economic and human capital development of Nigeria. Our Monarch is a great father and would not join issues with any media house, however, I think it is dutiful of any journalist that is sound to learn how to accord honour to revered traditional stools, and avoid being used by disgruntled persons to tarnish the images of global icons as the Billionaire Monarch whose business conglomerates have transformed Ugboland and Nigeria as a whole.