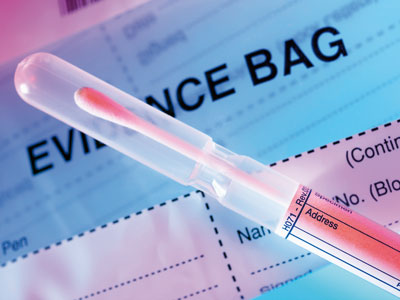 You go, Lagos! The state is serious about crime fighting and has established the first DNA Forensic lab in the country. Read the press statement below…

“In furtherance of its commitment to the criminal justice sector reforms and take the fight against crime to a greater level, the Lagos State Government on Tuesday announced that it has concluded plans to establish the first ever high-powered DNA Forensic Laboratory in Nigeria which will take off within the next six to twelve months.

The lab, which would be called the Lagos State DNA Forensics Centre (LSDFC), when fully operational, would fulfill an unmet need for DNA profiling which is a unique forensic technique that is now being used all over the world.
Addressing journalists at the Bagauda Kaltho Press Centre in Alausa on Tuesday, the State Attorney General and Commissioner for Justice, Mr. Adeniji Kazeem, said the establishment of the centre was another eloquent testimony of Governor Akinwunmi Ambode’s sincerity and seriousness towards fighting all forms of criminality.
Kazeem, who addressed the media alongside senior officials of the Ministry, said Governor Ambode had been at the vanguard of the war against domestic, sexual and violent crimes, and that the centre was geared towards vigorous justice sector reforms.
He recalled the ground-breaking donation of equipment worth N4.8 billion to the Nigerian Police, the Light Up Lagos Project, and the recent solidarity visit of the Governor to crime flash points like the Isawo area of Ikorodu where criminals have been terrorizing innocent citizens, among others as further proofs of the Governor’s determination to tackle crime.
Speaking on the importance of the forensic centre, the Commissioner said the facility which would be driven by the Ministry of Justice with active support of the Governor, will focus on DNA analysis to support the justice sector in diverse areas such as “collection and preserving reference and evidentiary DNA which can later be used in identifying criminals; decoding familial relationships of individuals which could also be a tool for the judicial system; and identifying victims and remains after natural and manmade calamities.”
Kazeem also explained that DNA profiling is an extraction of DNA from body fluids, semen, nails, hair and other DNA generic sources, adding that the centre would greatly help to controvert evidence of alibi and confirm physical presence of suspects at the scene of a crime and the origin of DNA to such suspects.
He said: “Even though the role of DNA in forensics, law enforcement and the justice sector is well known globally, a high-powered DNA analysis centre is not available in Nigeria. This means that most, if not all the DNA testing needs are performed outside Nigeria, a situation that leads to longer turnaround times and an overall higher cost of bringing closure to investigation and prosecution of crimes.”
He said when operational, the centre will serve the DNA needs of the state, members of the public, other states and neighbouring countries, saying it would be of international standard which all stakeholders including security agencies would benefit from.
On the areas of focus, Kazeem said the Centre would be deployed for criminal investigation to identify criminals with incredible accuracy and exonerate suspects mistakenly accused or convicted of crimes.
The Centre, according to the Commissioner, would also aid investigation on domestic and sexual violence cases, boost family and paternity proceedings, and help in identifying victims of natural and manmade disasters.
The Commissioner expressed optimism that the Centre would be a unique solution to fighting crime in the quest of the present administration for a safer and secured Lagos, adding, “Lagos is a unique place with a unique Governor who has continued and will continue to provide unique solutions.”
He further said the government was partnering with experts in the DNA field on the project, who would build, operate and transfer to government after about two years, a period within which the officials of the state must have been trained on how to run the Centre.
Fielding questions on the challenge of collecting database for the centre, Kazeem said data collated along the line, would be stored, and that other government ministries, departments and agencies would equally collaborate with the Ministry of Justice to effectively deliver on the mandate of the Centre.
SIGNED
HABIB ARUNA
CHIEF PRESS SECRETARIAT
FEBRUARY 23, 2016