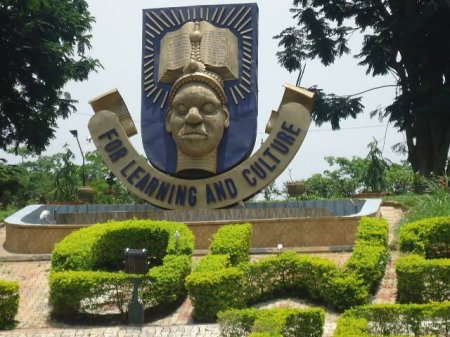 The management of Obafemi Awolowo University, Ile-Ife, Osun State has shut down mosques located in the school hostels over some allegations raised against a group called Muslim Students’ Society of Nigeria (MSSN).
A statement by the Division of Student Affairs (DSA) said the mosques, located in Fajuyi and Awolowo halls of the school allegedly harbors female students for prostitution and teaching of an alien doctrine with a fashion similar to the current Boko Haram insurgency.Dr. G. O. Akinola, head, Division of Students Affairs gives further details on the closure.

Below is full statement:The Division of Students Affairs (DSA) acting upon the Statutes and Regulations of Obafemi Awolowo University hereby declares closed until further notice, the two purported mosques in Awolowo and Fajuyi Halls for the reasons of peace, free movement of students and staff within the Halls and the overriding need for the security of all persons, assets and installation in the Halls.The reasons for this closure are as set out below:1. On Friday 12th August, 2016 when the current executive members of the Muslim Students Society of Nigeria (MSSN), Obafemi Awolowo University (OAU), Ife Branch were to be inaugurated at the Central Mosque, the Division of Students Affairs (DSA) was invited and was duly represented by the Vice Dean of the Division. There were issues at the inauguration when we were told of another group of Muslim students who wanted to impose themselves and their doctrines which are not consistent with the Constitution of the MSSN members. At that point the Vice-Dean was asked to interact with this group with a view to finding out what their arguments and positions were;2. After the Vice-Dean’s interaction with the group (which is yet to give a name to itself, although they insisted that they should be called MSSN too), we decided to call members of the group to a meeting at the DSA.They came on Tuesday, 23rd August 2016 at 6.15pm. After several attempts at making them attend the parley failed, we eventually held a meeting with them on this 23rd August. We stressed at the meeting the point that the DSA is only aware of the existence of only one MSSN as a registered Muslim students’ group on the campus of the Obafemi Awolowo University, Ile-Ife.We impressed it on the group that even the DSA is also aware that the National body of the MSSN recognises only one MSSN group here on campus. We therefore advised the group to, if they have any issue of disagreement between them and the mainstream MSSN, please for sake of peace on campus and interest of their members take steps to sort them out with the Executive of the MSSN on campus.3. The meeting deliberated extensively on how to bring this settlement about and at the end of it, it was agreed that a period of one (1) week be given to permit the group interact with the mainstream MSSN and settle their disagreement amicably failing which the two ‘mosques’ at Fajuyi and Awolowo Halls would be closed down for peace to reign.Note that this splinter group of the MSSN had begun to use the two ‘mosques’ in these Halls as a base for their anti-mainstream MSSN rhetorics and doctrinal disagreement on campus, including recruitment of students for their separate teachings. Note also, that these two ‘mosques’, converted as such were originally Cafeteria buildings meant for the respective halls under the University’s master plan.We also agreed at the meeting that if the DSA found that they were able to make progress on the reconciliation, even if they have not completely reached an agreement on doctrinal or worship issues, the suggestive closure of the ‘mosque’ would be suspended to permit for more room for rapport and deeper reconciliation. We agreed that we were going to meet again on the very day that the one-week ultimatum to reconcile expired, that is Tuesday 30th August, 2016. Meanwhile, desirous of a way to convince the DSA that the splinter group meant well, they invited the DSA to visit the two ‘mosques’ in Fajuyi and Awolowo Halls to see that there was nothing sinister in the activities of the splinter group and that if anything at all, they have been peaceful and law-abiding.