Men and their hidden sexual issues 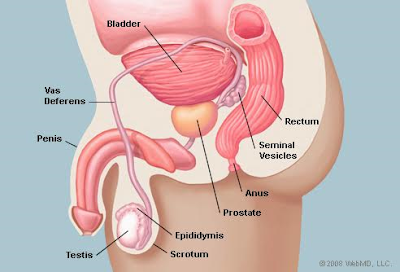 Problems in the bathroom may be related to problems in the bedroom for many men, as they get older they may develop urinary tract problems caused by an enlarged prostate, such as getting up many times during the night to urinate, may be associated with erectile dysfunction and other problems relating to sex in older men.

The prostate is a small, muscular gland in the male reproductive system. Your prostate surrounds your urethra and produces most of the fluid in your semen. The muscular action of the prostate helps propel the fluid and semen through your penis during sexual climax. Benign prostatic hypertrophy, or benign prostatic hyperplasia (BPH), occurs when the cells of the prostate gland begin to multiply. These additional cells cause your prostate gland to swell, which squeezes the urethra and limits the flow of urine. Obstruction may be so severe that no urine can leave the bladder at all. Indicators of sexual function are inversely related to the severity of urinary tract symptoms. As the men’s urinary symptoms increase, the level of sexual function decreased which will lead to an erectile dysfunction.
Erectile Dysfunction can be defined as the inability to achieve and/or maintain an erection sufficient for satisfactory sexual activity. Urinary tract symptoms resulting from an enlarged prostate that are most strongly associated with erectile dysfunction are:
·         A feeling of urgency
·         Getting up several times at night to urinate
·         A weak urine stream
·         Difficulty in urinating
At Mens Clinic we treat those suffering from erectile dysfunction, early ejaculation, low libido, and men’s general sexual health and we carry out tests relating to the Prostate Gland. You can call