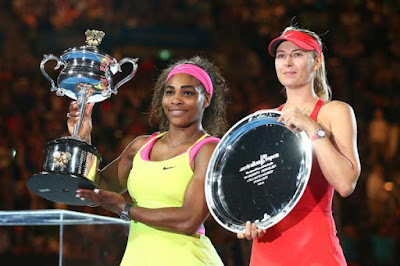 World number one Tennis star Serena Williams has praised her fierce rival Maria Sharapova for admitting to failing a drug test in the recently concluded Australian open. The two most famous female athletes in the world have long suffered a strained relationship on and off the court.

Williams was furious her former boyfriend Grigor Dimitrov left her for Sharapova in 2012 and also resents that the world No 7 earns more commercially despite her (Serena) being a better player..

Speaking in New York on Tuesday, Williams offered some praise to Sharapova.

Serena Williams added she was “not concerned” that any ban could damage the sport.

“There are a lot of great stars on the WTA Tour,” claimed the 21-time Major winner. “We have a lot of young players, young US players doing really great. When the time comes someone will definitely step up and be that leader.”

Sharapova faces a ban of 2-4 years from the sport which could effectively end her career unless her legal counsel can convince the tribunal of ‘mitigating circumstances’.