Man Killed By Friend Who ‘Slept’ With His Wife

Man Killed By Friend Who ‘Slept’ With His Wife 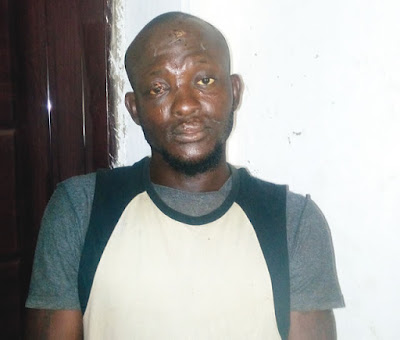 A 40-year-old man, Lukman Jimoh, aka Oyeolorun, has been arrested by the Lagos State Police Command for allegedly killing his bosom friend, Remi Oloyede, aka Ora.

Jimoh reportedly cut off Oloyede’s ears and stabbed him in the neck and eyes during a fight on Monday on Adedoja Street, Mushin.

Residents were said to have stayed away from the duo because they both wielded bottles.

Oloyede died on the spot after losing much blood, while his corpse was deposited in a morgue in the state.

Jimoh, who after the incident was taken to a clinic for medical attention due to the injuries he also sustained, was later arrested by policemen from the Alakara division.

PUNCH Metro gathered that the men fought over the claim by the deceased that his friend betrayed him by sleeping with his wife.

A resident, who spoke on condition of anonymity, said the two men had been friends for a long time.

She said, “Oyeolorun (Jimoh) and Ora (Oloyede) have been friends for a long time now. They were both living on this street before Oyeolorun relocated to Sango, Ogun State, where he is staying with his family.

“But about three years ago, Oyeolorun allegedly had sexual relation with Ora’s wife and he was very angry about it. From that time, he started looking for a way to get back at him for betraying him.

“To get even, he slept with Oyeolorun’s first wife, but Oyeolorun had already divorced the woman.Ora was still angry and seeking opportunity for a revenge.”

He said the last straw that broke the camel’s back was an issue over a handset.

Osunde explained that a resident had bought a handset from Oloyede for N1, 500 and when the buyer tried to operate it, it was faulty.

After the 38-year-old reportedly refused to refund the money, the buyer was said to have approached Jimoh to intervene.

He said, “Jimoh asked him to refund a part of the money if he could not return the whole sum, but he refused. He said even if anybody would talk to him, it could not be a man that slept with his wife.”

It was learnt that during an argument that ensued, the deceased broke a bottle, picked a splinter and extended another to the suspect, challenging him to a duel.

Jimoh, who reportedly hesitated, was said to have been compelled to strike back after the deceased attacked him.

A community member, Adewale Baloye, said people did not intervene because the duo were notorious for such fights.

He said, “It was around 2pm that I got a call that the men were fighting. When I got there, I saw a mammoth crowd on the street. I saw Ora (Oloyede) on the ground, in a pool of blood. His ears had been cut off and his eyes were gone.

“I quickly called a community leader and I was informed that the police were on their way. People took Ora in a tricycle to the Lagos University Teaching Hospital, but the doctors turned them back at the gate, saying it was too late. They just brought back his corpse to the area and from there he was taken to a mortuary.

“The police then went to our local clinic, where Oyeolorun (Jimoh) was receiving treatment and arrested him.”

She said, “The scene of the incident has been visited and the suspect arrested. The corpse was deposited at the Mainland Hospital morgue, Yaba. Investigations are ongoing.”