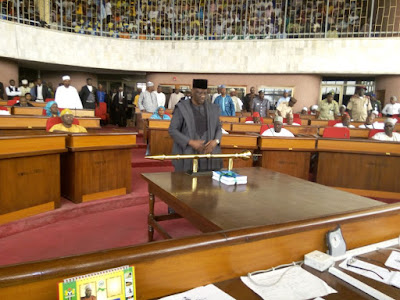 The Kwara State House of Assembly last week washed its hands off the N6 billion street light project tagged “Light Up Kwara”. The project had attracted diverse comments from some sections of the public who noted that the government should have channelled the money for the project to address salaries backlog in the state.
The Senior Special Assistant to Governor Abdulfatah Ahmed, Dr Muideen Akorede, during a radio programme last week noted that the project will not only expand the commercial space in the state but boost night life and security.
But when asked whether the House appropriated funds for the project during the weekly Media Interactive Session, Chairman, House Committee on Information, Hon Saheed Popoola said the legislature is not in the picture of the project.
According to him, the executive has not communicated the House on the issue. “We also heard the issue of Light Up Kwara in the news just the way you did. There is no bill that has been moved in the House to that regard and the executive has not written at all to us regarding it. “We are not aware of that project and I am being categorical about this. We are not aware that such project is coming up in the state. Nobody has notified us and we regard it as such,” Popoola added.
He said the House under the leadership of the Speaker, Dr Ali Ahmad, has passed 10 bills into law, since its inauguration 18 months ago adding that another eight bills are now on the verge of final passage after passing second reading just as two other bills have passed through first reading.
Recall that Governor @alhajiabdulfatahahmed  had approved the “Light Up Kwara” project to construct street lights covering 78 km in strategic places across the three senatorial districts of the state at the cost of N6.07billion.