“If I’m laying down with a man butt-naked and his condom is on, and I say no, it means no”- Amber Rose 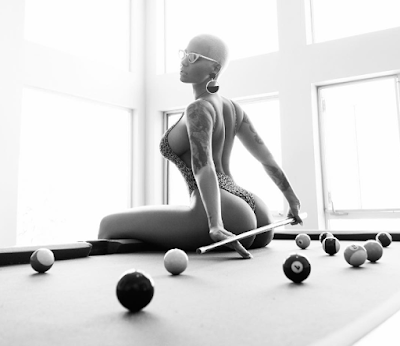 Amber Rose was a guest on one of OWN’s newest shows ‘It’s Not You, It’s Men’, hosted by Tyrese Gibson and Rev Run, and during her appearance, Rose revealed that she gets “sexually assaulted constantly,” and proceeded to go toe-to-toe with the male hosts, who suggested that perhaps fans’ willingness to act in such ways is due to the way she presents herself.

“When I walk down the street, people think because I’m famous, or I’m cool and I’m taking pictures, that they can just grab my ass or put their hand under my skirt or, ‘Oh Amber, can I come grab your boobs?’ Girls do that to me all the time, and it does get like, I love you girls so much, but it does get like, stop grabbing on my boobs constantly and my butt. And guys, too. This is my privacy.”

After hearing this, Rev Run offered that maybe this is the case because of “a representation of what you’re wearing and stuff and seems like, in their mind, what you’re representing.”
His co-host, Tyrese, echoed similar sentiments, telling Amber, “I’m just saying, the comfort-ability some people find in wanting to touch or grope you…it’s an energy that is sent out there that creates that type of response”.
Rose was quick to disagree and explain why she feels that is not a valid argument.

“No it doesn’t, and I’m gonna tell you why. If I’m laying down with a man butt-naked and his condom is on, and I say, ‘You know what? No. I don’t wanna do this. I changed my mind.’ That means no. That means f—k no,” she says. “It doesn’t matter how far I take it or what I have on, when I say no, it means no.”

“I’ve just heard a quote that was like, ‘Dress how you wanna be addressed…'”