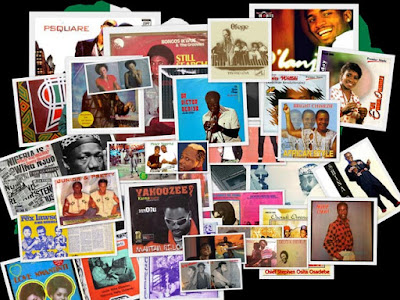 The Nigerian music industry has come a long way and many talented artistes can afford to take risks to venture into the industry knowing they can make money once they get “blown”; parents are no longer ashamed getting to know their kids’ musical ambition.
The music industry in Nigeria has been one of the fastest growing in Nigeria over the past 10 years; listenership, revenue from sales of albums, export of our music, quality of videos are just a few of the factors attributing to the growth of the industry.

Here are the ways through which
Nigerian Artistes make money;
Album Sales
In theory, this is the major way through which artistes make money. Although in Nigeria this isn’t straightforward and it’s very complicated. Millions of albums are sold through marketers in Alaba Market, but the artistes only get a slice of the sales. The ‘Alaba Boys’ control the Nigerian music industry and are also responsible for the success or failure of artistes [although the trend is shifting with the emergence of the digital audience]. The marketers have wide distribution networks which make it easier for them to distribute the albums of the artistes nationwide. PSquare reportedly collected about N50 million for the marketing, duplication, and distribution of their ‘Danger’ Album. Their ‘Game Over’ album was also sold to TJoe Enterprise (a major marketer) for N10 million. Other artistes who have made money from their albums by signing deals with the marketers include Burna Boy; who sold his LIFE album for N10 million, M.I sold the distribution right to Ahbu Ventures for N20 million. Timaya was paid some thousands for his first album, but he now earns millions from selling the marketing rights for his recent albums.
The truth is that it is extremely difficult for artistes to make money in Nigeria through album sales except for the A-Listers like PSquare, Wizkid, Tiwa savage. The upcoming artistes usually have to even give marketers money to help them promote their albums so they can be a hit nationwide. Once you reach that elite stage the money comes in droves.
Endorsements
Endorsements are the real cake in the music industry. It is another means through which artistes make loads of money – Wizkid signed a multi-million naira endorsement deal worth about $350,000 US dollars. He was first signed by Telecom Giants MTN and was paid N45 million, but he has since been snapped up by Globacom and was even offered almost double the amount MTN paid him. Wizkid reportedly got N120 million from GLO for a 2 year deal; D-Banj signed a deal with Globacom worth around N100 million. He also has a lucrative deal with Apple/Beats by Dre which he signed in October 2014. Dbanj also became an ambassador for Ciroc drink in Nigeria and now he is maximizing his entrepreneurial skills with the Bank of Industry; Don Jazzy, CEO of Mavin Records isn’t only making money from his star-studded record label, he also has very lucrative endorsement deals including one with Loya Milk where he got nothing less than N50 million. His N25 million deal with MTN, and his mouth-watering endorsement with Samsung Africa raked in millions of naira.
P square’s deal with Globacom is reported to be in hundreds of millions of naira.
Flavour also has multi-million naira endorsements with well-known brands such as Globacom, Harp and Onga seasoning; Banky W first major deal was the much talked about $1 million Etisalat money. He also has an N100 million endorsement deal with Samsung Mobile.
Shows
Show performance is a major way through which Nigerian artistes make money. Although the amount earned can vary from artistes, the good thing about shows is that as long as you have a buzz and have the right connections you can earn something from shows. Nigerian artistes also perform at political events, private parties of politicians and businessmen, concerts, birthday parties, and at universities.
Flavour for example charges between 5 – 7 million naira for shows in Nigeria, while to perform on an international stage he charges as much as 8 – 10 Million Naira.
Yemi Alade charges between 3 – 5 million Naira per show.
AdekunleGold charges around 1.5 – 2.5 Million Naira per show
P Square charge between 10 -15 Million per show.
Olamide earns around 5 Million Naira per show.
Davido earns around 6 – 7 million naira per show.
Business & Investments
Nigerian artistes are smart and know that their buzz can’t last forever. They also diversify their revenue streams by investing in various businesses to keep the money flowing.
P Square reportedly own Rayfield Hotel in Jos, and two multi-million naira factories in the same city, where they built a multimillion naira bakery and sachet water companies for their dad and mum, among other investments. They have also ventured into Oil business which they confirmed on their Instagram page in 2013.
D Banj has always had a knack for business, traits which he claimed he got from his mother.
D Banj organized a Koko Mansion reality TV show some years back and earned some millions after striking a deal with a satellite TV station to air the programme. He has also ventured into agriculture by starting his Koko Garri brand and also Koko Mobile telephone.
Digital Monetization
Although only a few Artistes make money from Youtube, it is fast becoming one of the means through which Nigerian Artistes generate income. On YouTube, whenever your music is used in videos that are running ads, YouTube pays a portion of that advertising money to the rights holders of the song. Youtube usually pays $2 for every 1000 views. Another major advantage of Youtube is that it helps new fans around the world discover your music and increase your popularity.
P Square’s ‘’personally’’ is the most viewed Nigerian video on Youtube with over 46 million views. Doing the calculation, the duo wouldn’t make less than $100,000 from the video. P Square have a total of four (4) videos in the list of the ten (10) most viewed videos on Youtube. Dbanj’s Oliver Twist video is 2nd on the list of the most viewed videos in Nigeria, with over 34 million views. Other Artistes on the list of the most viewed videos on Youtube include Iyanya, Davido, Timaya, Yemi Alade, and Flavour.
Licensing
Nigerian Artistes make money if their song placed in a film, commercial, or TV show, chances are they’re going to pay you a licensing fee. These fees vary greatly, depending on the budget for the project, and how badly they want your particular song. 2face song African Queen was used on Fat Girls. This isn’t a very developed means of making money yet in Nigeria.