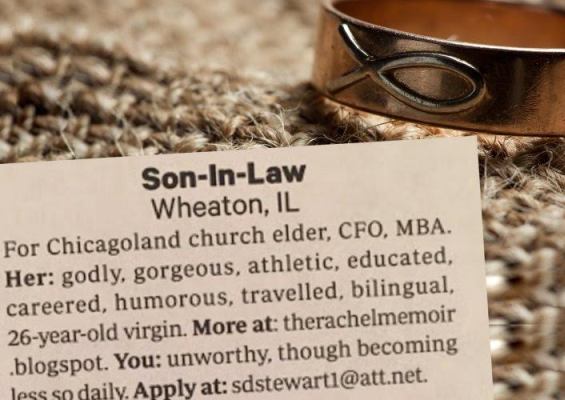 Stephen Stewart placed an ad in a Christian magazine about his 26-year-old “virgin” daughter for prospective grooms, the Daily Beast reports.
The ad describes Rachael Stewart as “godly, gorgeous, athletic, educated, careered, humorous, travelled, bilingual, 26-year-old virgin.
You: unworthy, though becoming less so daily.” Even more disturbing, the Ad was placed in the jobs section of the magazine.
Christianity Today apologized and pulled the ad from which print it said “has been rightly seen as demeaning and in poor taste.” But the print version had already been sent out, so there’s little to be done about it.
“We want everything in our magazine to reflect beautiful orthodoxy, and this ad did not,” editor in chief, Mark Galli, said. “We have taken a hard look at our ad review process, made some changes, and we can assure our readers that no ad like this will appear again.”
“At least it’s appropriate they placed it in the Employment Opportunities section because putting up with this father-in-law’s shenanigans is a full time job, without any paid vacation,” Rachel wrote in a since-deleted blog post after commenters there drew her attention to it.
Rachel wrote she was amused and called the ad “remarkable” on her blog. There she also recounted calling her father after finding out about the ad placed for her future spouse. Her father Stephen reportedly closed his office door before defending his choice to place the ad, and reading it aloud to his daughter. She was “impressed, but not surprised,”
“I’m just nervous if this doesn’t work out, next I’ll find my face plastered on a billboard,” she said, jokingly, in the blog post. “Oh gosh, now I’m giving him ideas.”