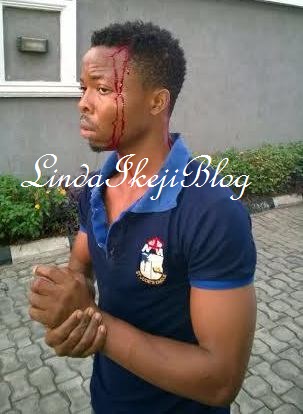 Here’s really what’s going on at P-Square’s Omole home and this is exclusive. It wasn’t police officers that stormed their home this morning, rather, it was Lagos High court Sheriffs. The court Sheriffs stormed the music duo’s home about 5.30 this morning with a court order to seize property following a judgement against them.

When the security men at P-Square’s home refused them entry, saying the brothers were not home, they allegedly forced their way in injuring one security guard. (that’s the injured guard above) And here’s why they came for the brothers…

Many years ago…about 8/9 years ago, there was a show in Benin that they were supposed to perform in. According to a source who spoke with LIB, after they were paid N1million, the brothers arrived Benin for the show only to be told that the show had been postponed till the next day. P-Square refused to stay till the next day and returned to Lagos. The organizer of the show demanded for his money back and when he didn’t get it, took the case to court. He got a court judgement and promptly moved to Lagos.

The source said the case had been in court all this while but the brother’s weren’t really aware of it as no one represented them. It looks like judgement may have been passed in absentia, which brought the court Sheriffs to their home today. They tried to tow a vehicle after showing the papers brought from the court but no one would allow them take any car away. The court Sheriffs are still in the house