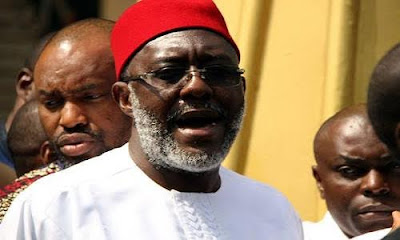 The Fundamental Rights Enforcement suit filed against the EFCC by the National spokesperson of PDP, Olisa Metuh, has been dismissed by Justice Okon Abang of the Federal High Court, Abuja.

The judge dismissed the suit at its hearing this morning March 9th. Metuh had filed the suit challenging his arrest and detention by EFCC over his alleged involvement in the $2.1 billion arms deal scandal.

Metuh asked the court to make a declaration that his arrest on January 5th was unlawful as there was no warrant of arrest issued by any court. Metuh also argued that his detention by EFCC for 10 days without being charged to court violated his rights. He asked the court to stop EFCC from further arresting him.

Dismissing Metuh’s suit, the presiding judge, Justice Abang held that EFCC had the constitutional powers to arrest and detain him. Justice Abang stressed that his arrest was lawful as it was granted by a Chief Magistrate court. He thereafter dismissed the suit for lacking in merit and awarded a cost of N15, 000 against Metuh.