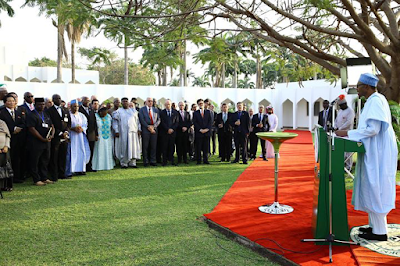 President Buhari says Boko Haram members are now hiding in Sambisa forest after they were chased away from all the Local government they hitherto held captive before he came into office. Buhari said this while addressing members of the diplomatic corps during a reception he organized in their honor at the state house yesterday February 18th

“It is worthy to note that when I assumed office on May 29th 2015, Boko Haram had full control of fourteen (14) Local Government areas in the North East, but today, the group holds no territory in Nigeria. They are hiding in Sambisa forest and occasionally undertake cowardly attacks on innocent citizens in soft targets”he said