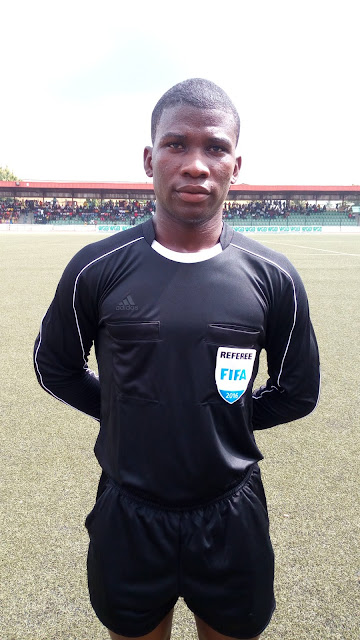 The name of  Adebimpe Quadri will surely ring a bell to lovers of Nigeria Premier League (NPL) as he is also Nigeria’s youngest referee and his popularity is about to soar higher due to his appointment by the Confederation of African Football (CAF) as one of the two Nigerian referees to officiate a Champions League match.
Below are seven things you should know about him;
1.) Adebimpe Quadri, a Lagosian was born 25 years ago
2.) He received his FIFA badge at an event that had Solomon Dalung, the country’s Sports and Youths Minister in attendance in December 2015

3.) At 24, he took over the record of the youngest Nigerian referee with a FIFA badge from Ferdinand Udoh who was FIFA badged at age 26.
4.) Adebimpe is a member of the Lagos Referees Association.
5.) He went international as a referee in 2016.
6.) Adebimpe will be assisted by Samuel, Isah Usman and Abubakar Ago for the Champions League tie between AS FAN of Niger Republic and AS de Tanda of Cote d’Ivoire in Niamey come February 18.
7.) His dream is to become the first Nigerian referee to officiate a senior FIFA World Cup tie.