Adam Johnson denies having oral sex with underage girl, says they only kissed but he can’t remember getting aroused 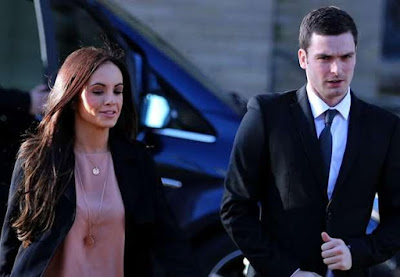 Footballer Adam Johnson was in court today and denied having oral or penetrative sex with a 15 year old girl. He admitted to only kissing the girl and when asked by prosecutor Daniel Thomas if he was sexually aroused by the kiss,  Johnson said he had ‘no specific recollection’ of being sexually aroused but admitted it was a ‘possibility’.

Johnson arrived at Bradford Crown Court today without his girlfriend Stacey Flounders, the last time she appeared in court with him was on Tuesday last week.
The court heard last week that Johnson twice met a 15-year-old in January last year after she befriended him on Facebook.
At the first meeting, the girl got into Johnson’s Range Rover Sport, where he signed two football shirts for her.
The pair then exchanged messages online, at which Johnson spoke about getting a ‘thank you kiss’ from the girl, the jury heard.
When he met the teenager in his car for a second time, she says she performed a sex act on him and he put his hand down her trousers, an allegation the football staunchly denies.
The Englishman already sacked by his club Sunderland for admitting to child sex offences of grooming and kissing an under age girl , also confessed in court today that as at when he was kissing the girl , he and his partner Stacey Flounders were having a rocky relationship and he also sent sexual messages to different women in their 20s.
He told the jury: ‘I wasn’t being a good person to my girlfriend or my daughter. I was talking to people I shouldn’t have.’
Prosecutor Johnson’s QC Orlando Pownall asked him: ‘You pleaded guilty to sexual activity with a child and meeting a child following sexual grooming. Did you accept kissing [the girl)?’
Johnson replied: ‘Yes.’
Mr Pownall continued: ‘Did you interfere with her or indulge in oral sex with her?’
He answered: ‘No, I never.’
The court has previously heard that Johnson searched ‘legal age of consent’ online just days after he met the girl.
Johnson said today that the online search was as a result of a changing room conversation his teammates had.
He said the Sunderland players were discussing a TV programme and the ‘foreign lads’ didn’t know the law.
Johnson told the court: ‘We were having a discussion in the dressing room about a programme that was on a couple of days ago about different ages and things like that.
‘There are a lot of players in our team from all sorts of countries and we were having a discussion about laws and ages and things in different parts of the world.’
He said he knew kissing the girl was an offence but did not realise that communicating with her with the intention of kissing her prior to meeting was also an offence.

Mr Pownall asked: ‘Were you contemplating any kind of sexual encounter with her?’
Johnson replied: ‘No.’
He said he asked for the teenager’s number because she had been asking for signed shirts.
When asked why he told her not to tell anyone she was messaging him, he said: ‘Loads of reasons, i had a girlfriend, I knew what could be made of speaking to a girl that age, I didn’t want her to tell her friends and them to come and ask me for shirts as well.’
The court was also read a statement Johnson made to police after his arrest in March last year.
In it, he says: ‘I recognise my behaviour was wholly unacceptable. I accept the stupidity of my actions.
‘I wholeheartedly apologise to [the girl]. She is a child and ought to have been safe in my company.’
Source: Daily Mail UK