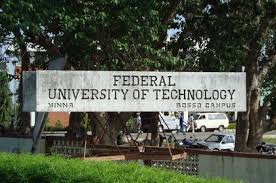 The Nigeria Police Force, Niger state command has announced the arrest of three persons in connection with the protest by students of the Federal University of Technology, Minna over the death of their colleague on a football field.

It would be recalled that the late student, said to be at 300 level slumped on a field Wednesday and was rushed to the university’s clinic where he was pronounced dead .
Not happy with the pronouncement, the students embarked on demonstration from the clinic. According to them, the deceased was not treated on arrival, only to be informed of his death.
The Police Public Relations Officer (PPRO) of the Niger command, DSP Bala Elkalla, said that the rampaging students burned part of the University clinic and destroyed the official car of Dean student affairs.
He said that the fire service along with police and university security personnel’s succeeded in preventing the fire from spreading to other buildings.
Reacting, a lecturer at the university said the student died before being brought to the clinic.
“He died before coming to the university clinic; it’s not that he was not attended to, he died before arrival. ”
“The students have no reason to embark on senseless demonstration; we all come from God and to Him we shall all return,” he said. (NAN)